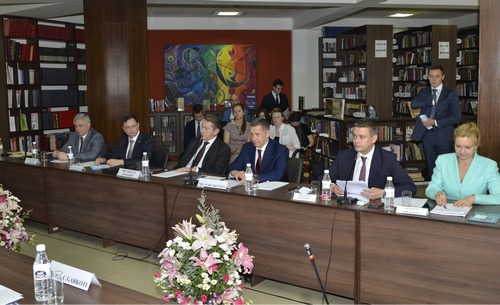 In order to strengthen the inter-university cooperation between Russia and India, a joint Russian-Indian working group will be created within a month, which will include universities of the Far East and the Arctic.

“Russia and India need joint educational programs that will allow them to get to know and understand each other better. I propose to concentrate our efforts in the Far Eastern and Arctic territories. In the near future we will gather all the rectors of universities in the Arctic and the Far East. They will choose the composition of the working group, about which we will inform our partners. A contact person from the members of the working group responsible for interaction with Indian universities will be assigned. Within a month, the working group will determine where cooperation in the field of education and science can be the most effective, approves the direction of interaction and form, ”said Yuri Trutnev.

Deputy Head of the Department of Higher Education at the Ministry of Human Development of India, Saravana Kumar, launched a number of inter-university cooperation initiatives, including the Spark research promotion program, the Global Initiative Academic Networks (GIAN) and the student and faculty mobility program. The Indian side proposed to consider the possibility of forming a working group at the intergovernmental level with the rectors of Russian and Indian universities joining this work. “International cooperation is a key component of the development of education in India. Our institutions have autonomy, but the conclusion of intergovernmental agreements will certainly contribute to the improvement of inter-university cooperation between India and Russia, ”added Saravan Kumar.

Following the discussion, Yury Trutnev instructed the Ministry of East Development of Russia to work together with the Ministry of Science and Higher Education of the Russian Federation and the Far Eastern Federal University (FEFU).

The aspects of co-financing student exchange programs with the involvement of the FEFU program were considered. “The government of the Russian Federation is ready to participate in the financing of these programs. India and Russia traditionally have friendly relations, but so far in the field of education we do not cooperate as intensively as we can. I am sure that if we unite our efforts we will create mechanisms for the exchange of teaching methods, working together in the most promising areas of research, we will achieve significant results, ”said Yury Trutnev.

In his opinion, FEFU can become a key platform for interaction with Indian universities. Rector of FEFU, Nikita Anisimov, suggested opening representative offices of Indian universities in the Far East and offices of the Russian University in India. In turn, Vice-Rector of the University of Chaudhary Ranbir Singh, R. B. Solanki initiated the opening of the department for the study of yoga in FEFU.

The issue of preparing for the fifth anniversary Eastern Economic Forum was separately discussed. The main guest of the Forum this year is expected to be the Prime Minister of the Republic of India Narendra Modi. Yury Trutnev invited the participants of the round table to visit the VEF-2019.

“Traditionally, on the margins of the forum for FEFU students, lectures of VEF participants are organized - scientists, researchers, managers of large companies. I believe that this year we will be able to organize such a cycle of lectures, ”he said. The Vice Premier invited Indian universities to take part in the development of the WEF program, including submitting proposals to the heads of state in the field of educational projects in Russia and India.

The idea of ​​the FEFU on organizing the BRICS semester next year was discussed. The Russian university intends to invite 25 students from each BRICS country, including from India, to study for one semester at FEFU. The initiative was supported by the Indian side.

Representatives of Indian universities launched an initiative to hold a Russian-Indian conference on education. “India intends to expand the number of joint research projects with Russian universities. We believe that joint personal meetings of the faculty will be very useful for the development of future joint projects, ”- Saravana Kumar. He also proposed to develop a system for the exchange of faculty members in universities of the two countries.