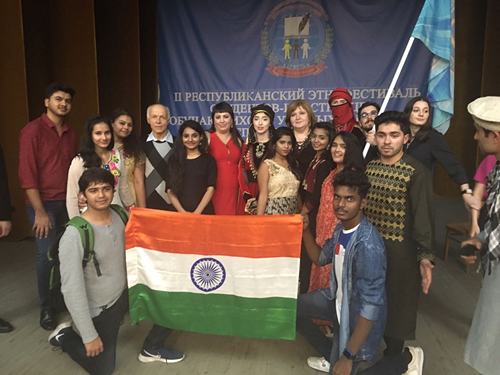 The II Republican Ethnic Festival of Foreign Students was held on October 24, 2018 in Dagestan State University. The event was organized by the Ministry of National Policy of the Republic of Dagestan in cooperation with the Dagg University.

The festival was attended by foreign students, representatives of the executive authorities of the republic and higher educational institutions of Dagestan, as well as members of public organizations in the region.

In the framework of the official opening, the first deputy minister for national policy of the Republic of Dagestan Arsen Makhmudov addressed all participants with a welcoming speech. He noted that the ethnofestival is being held for the second time. “Today we have a very rich cultural program. All guests will be able to get acquainted with the culture of foreign students, and foreign students in turn will learn about the culture of Dagestan at a festive concert, ”said A. Makhmudov.

Foreign students and activists from the Center of Culture of Dagestan State Medical University also took part in the festival. They presented to the audience bright and colorful numbers: Georgian song, songs in English and Ukrainian languages, as well as Georgian dance and potpourri dance of students from India.